We use cookies to make this site better, find out more. Cookies are on
previous article
Apr 2020 - Contents
next 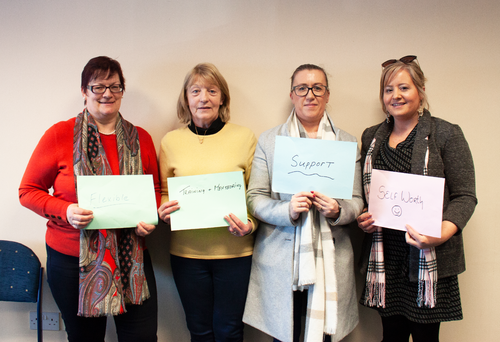 The aim of the INOU’s project is to raise awareness of the right to decent work and we ran three workshops during the latter part of February and early March. The first two regional workshops, held in Dublin on the 21st February and Longford on the 27th February were aimed at people working in INOU member organisations and other national non-government organisations and community based services. The third workshop on the 5th March was aimed at our individual and General Branch members as well as our two Local Training Initiative (LTI) learners.

The events were exceptionally well attended with over 60 people attending the two regional workshops and 13 people attending the third workshop, and the INOU is grateful to people for their participation. The topic of decent work deeply resonates with people. We had seen that initially at last year’s Annual Delegate Conference. Decent work was the conference theme and prompted a series of very interesting roundtable discussions. This was further confirmed at the workshops.

A number of concerns and potential solutions were highlighted across the workshops and these included: the importance of good wages and good terms and conditions; concerns over uncertainty of hours a person may work; the importance of support services including having in place affordable housing, childcare and transport; the importance of back to work supports and that people know about them; the need to more effectively tackle discrimination and the important role for Trade Unions.

The INOU forwarded a briefing paper to attendees in advance of the workshops, informing people of the project and the welcome funding from the IHREC; the International Labour Organisation’s important definition of decent work; key articles in the International Covenant on Economic, Social and Cultural Rights; Goal 8 of the UN’s Sustainable Development Goals; and key principles in the EU’s Pillar of Social Rights.

The briefing paper will be further developed, building on the workshops and will be circulated in advance of a national seminar we are planning for the 16th September in Dublin. The seminar will provide an opportunity to develop the discussions from the three workshops, including the key phrase / word we asked people to write at the end of the workshops, which were captured by photograph. It is intended that the national seminar will also build further awareness and understanding of the right to decent work and how it relates to other rights.